The project started in 1984 and set to address the need for all of our citizens, no matter how old or disabled, to have the opportunity to stay in their own area, if that is their wish. For too long we all witnessed the sad silent migration of too many of our older people to faraway institutions. They once had families like us, but due to the ravages of time and emigration they found themselves alone in their sunset years. When they needed our help most we had nothing to offer except to send them to a faraway place where they knew no-one, and like the old Red Indian, in many cases they just lost heart and died. They returned again to their own area, but in a box.

Likewise many of our older emigrants who went abroad in the 40's, 50's and 60's have returned again to their own area after many years of emigration - back to our low support sheltered housing. Here people are living with the minimum of support in the bosom of the community with the support of electronic alarms and St. Brendan's staff on site at all times. People can go to the centre for their meals or prepare their own meals if they wish.

This is only as it should be, that we remember those two groups of once forgotten people, both Irish and older, and both groups equally had been let down by the system.

​Yet it is only right that we do this. It is only right also that every community think about doing this in their own area. It's very much a two-way process and a recipe for rural regeneration also.

The St. Brendan's Village Project has been a powerful tool for rural regeneration. Keeping people from having to leave and returning them to their own area has a massive humanitarian spin-off for those people who stay or are returned, but it has also helped us regenerate our village. By doing something worthwhile for those who truly deserved to be helped,we have succeeded in saving our own village.

The St. Brendan's Village Project is now the biggest local employer in our area. Thanks to those older folk who have returned, we now can provide welcome employment so that many of our young people needn't leave any more to find employment. In fact many people travel from the high population centres of Mayo, including Westport and Castlebar, to work as part of the St. Brendan's team.

​Driving force behind the creation of St Brendan's Village has been local General Practitioner, Dr Jerry Cowley, who argues there is a great need to retain people in rural districts.

"Our young people had to go in the past because of a lack of employment. The sad and silent emigration of the elderly was also happening on a daily basis to faraway institutions when they were most vulnerable and alone" In Mulranny St Brendan's Village has stopped that exodus.

But, says Dr Cowley, the government must give maximum financial support to maintaining and supporting older people in the community. The need to retain and build on services in rural areas such as day centres and housing is critical and could break the vicious circle of continuing depopulation and further erosion of services. 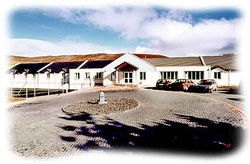 1998 was the realisation of a dream when the final part of the Mulranny St. Brendan's Village Development became a reality - the St Brendan's High Support Unit catering for up to 36 people.

When people can no longer live in our community or in our low support sheltered housing, even with the support of the electronic alarms and our on- site staff, they still have the opportunity to stay locally no matter how frail or disabled, thanks to our high support St. Brendan's Unit.

This Unit, for people with medium to high support needs, has single and double rooms, two day rooms, an oratory, a dining area and showers, baths and disabled friendly facilities.  A full range of medical and care services is provided by visiting professionals who use a consulting room in the unit as their base. In addition to allowing people to live locally, the scheme has aided rural regeneration. It continues to be the biggest local employer.

Care of the Elderly

Communities are involved to different degrees in the services they provide. In Mulranny we provide a continuum of care, providing a greater degree of care as is needed, so preserving personal independence, dignity and personal autonomy as much as possible.

Our St. Brendan's Village Project is a working model for the care of older and disabled people in their own community, which is gaining international recognition as a model suitable for replication into the future. It has been presented as such in Clontarf Castle by the Irish government at an EU Policy Maker's Conference, at an international Conference on the Care of Older People at Home in Wales, and in Denmark. It is the subject of many publications in several languages.

​Yet unless initiatives such as Mulranny get sufficient ongoing care support then they definitely won't be replicated, as they should be. There should be more of a balance between the millions of euro pumped into keeping people in profit driven non community nursing homes, and the lack of greater support for facilities such as ours which allow people the opportunity to stay locally if that is their wish.  We rely heavily on voluntary fundraising so that we can continue to provide our service of complete care in the community. 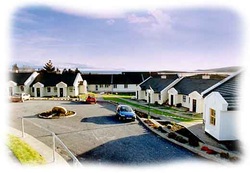 While most European Union (EU) citizens find their own solutions to housing in older age, a significant minority will always need help. Providing decent and secure homes for this group of older people has long been at the centre of the work of social housing organisations in the European Union.

As the Millennium approached their minds were concentrated by the increase in the number of older people in Europe, which has been described by the EU as the 'most important social phenomenon of the late 20th century'.

The proportion of very old people in their 80's and older is increasing significantly and with it, the number of people with dementia and physical difficulties. Against this background, EU members are faced with the challenges of financing state retirement pensions, stretching social care budgets and providing shelter for older people whose expectations are rising.

Social housing organisations in the EU are rising to this latest challenge.

In a report produced by CECODHAS, the European Liaison Committee for Social Housing (with funding from the UK-based Joseph Rowntree Foundation), to mark the United Nations' Year of Older Persons, one of the Main Recommendations is that governments and providers should help people stay in their communities.

St Brendan's Village, Mulranny, Ireland, and the SLE Habitat extra-care scheme in Lille, France are, according to this Report, 'good examples of projects built to meet local needs that keep older people in the communities where they have spent most of their lives. Residents have the support of family and friends in familiar surroundings'.

​St Brendan's Village is a community response to the needs of older people living in the village of Mulranny and the surrounding area on the west coast of Ireland, where more than 30% of the local population is aged 65 or more.

Residents are from the surrounding area and local care homes. Several are emigrants who have returned from the UK.

Should you require any further clarification or should you wish to visit the centre please contact us to arrange a suitable time.